The Miss Molly I Adventures - Part 8

This is the eighth part of the story of our adventures with the junk-rigged, ferro-cement boat Miss Molly I. The complete story is slowly but surely developing into several chapters and will take a while to tell, so will gradually unfold as and when I get time to add to it. From my point of view, it was a great time and I hope to tell the story in its fullness to try to do it justice.

Chula Vista was a great stop-over place, but, as is the nature of cruising, was only ever going to be a transitory port for us. The marina was beautiful and the climate mild, even in late November. We took the opportunity to head into San Diego for a look around, and also did one of the most important things we needed to do while we were there - got our visas and fishing permit for Mexico from the consulate. Basically speaking, we were told that every boat heading south had to have a fishing permit and that there were expensive consequences for anyone caught not having one - I guess it's really just a kind of cruising tax, but many countries have such a tax and, in a way, it's all fair enough.

After 9 days in Chula Vista, it was time to head on; November was drawing to a close and we had a goal of being somewhere nice, and perhaps tropical for Christmas. We headed out of San Diego Bay mid-morning and turned south towards Mexico. We were back to being a crew of 2, having said fond farewells to Joy in Chula Vista - she would head back up to Half Moon Bay to collect her motorhome, and then back to Crescent City, to where we met her in the first place (her wanderlust and spirit of adventure never left her though, and, at the time of writing, she is currently residing in Alaska, having commuted several times between Florida, California and Alaska, spent time in New Zealand and visited us in Germany) 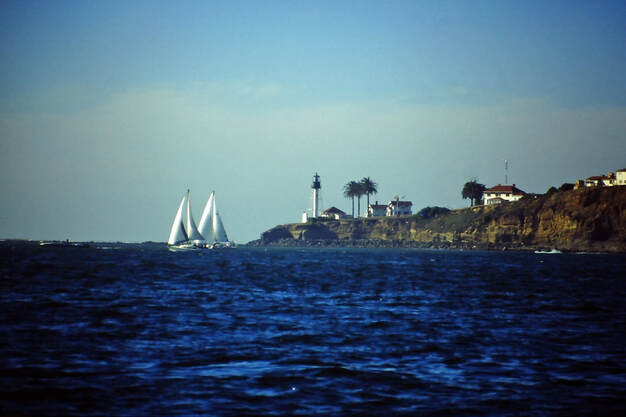 Leaving San Diego Bay
Shortly after turning south, we spotted a pair of barges that were obviously laying cables of some sort; the 2 barges were close together with  enormous drums of cables on the decks and leading over the sides of the barges. A big schooner- rigged training ship, flying a square topsail and double head sails, was on a tack that appeared to be taking her right between the 2 barges. Over the VHF came an anguished shout. "Sailboat, sailboat. If you keep going like that, we're gonna have to drop all these cables!". The training ship did a very prompt go about. Heaven only knows what they were thinking! 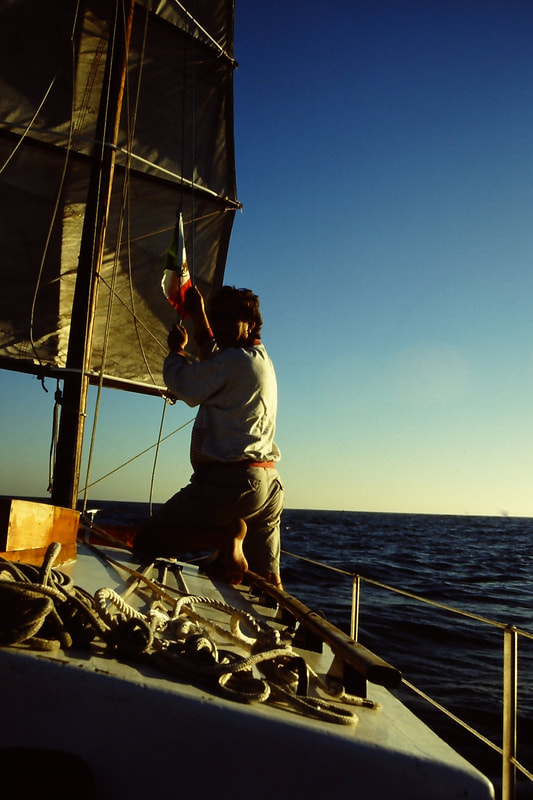 Mexico!
We crossed the line into Mexico at about 15:30 that afternoon and continued south through the evening and into the night. Night bought a dead calm and we motored on with the autopilot steering, arriving at our clearing in destination of Ensenada in the early morning. We took a mooring in the harbour and went ashore to complete the necessary customs, immigration and port captain paperwork. Mexico required paperwork in triplicate, to be checked in at every major town that you went in to, but, despite this, it all went smoothly and the officials were mainly a friendly bunch. I have no idea what they did with all those pieces of paper though - maybe there's an enormous warehouse somewhere, stuffed to the gunnels with paperwork handed in by the thousands of cruising sailboats that pass through. Whatever, it was certainly good to be in Mexico, in a very different cultural environment! 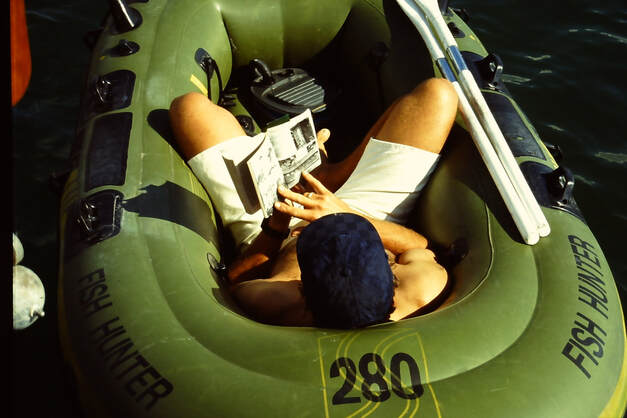 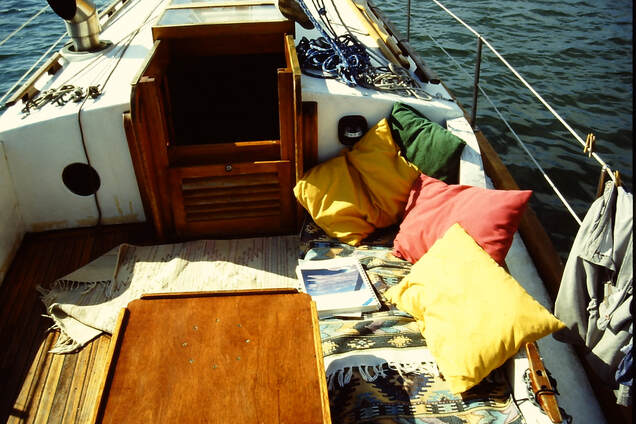 The cockpit getting some colour! 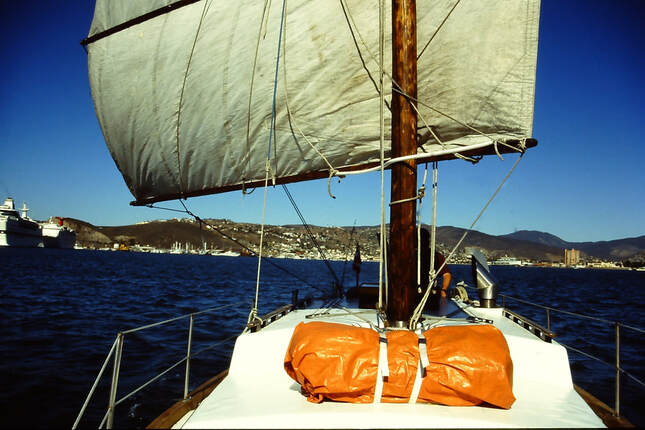 Sailing out of Ensenada
We spent one full day in Ensenada and then were ready to move on again, We had the idea that we'd like to be in Cabo San Lucas, right on the very southern tip of the Baja peninsula, for Chistmas, so, obviously, we needed to keep moving at a reasonable pace. So, mid-morning we raised sail and sailed off the mooring and out of the harbour. There was a small island called Isla Todos Santos a short distance offshore and we rather liked the idea of anchoring out there for a night, but, as we approached the bay on the island that we'd picked out as an ideal anchoring place, it became clear that some sort of fish farming activity, or suchlike, was going on there and that anchoring there was not going to be possible. We headed on  southwards beyond the island until we reached a spot called Puerto Santo Tomas, where we anchored in a horrible, rolly anchorage for the night.

It was, in fact, so horrible and rolly that we were underway again at first light the next morning, heading southwards once more. Our attempts to clear the kelp beds off Punta San Jose were unfortunately unsuccessful and once again the boat hook was put to use to disentangle the pesky stuff from the rudder - actually, we had to put her into reverse and back the last bits off!. A group of dolphns came and played with us in the early afternoon and, as the sun sank, we rounded Punta Colonet and anchored in its lee.

That lee offered little protection - the ocean swell simply diffracted around the point and it was another uncomfortable, rolly anchorage and largely sleepless night! The next morning, we sailed out into a lively wind and building seas. Close in, the waves were sloppy, choppy and uncomfortable, so we made the decision to head out to deeper waters. The wind built up to 30 knots and the waves got bigger and bigger. We made very rapid progress, surfing down the waves, heading south towards Isla San Martin, where the anchorage was entirely unprotected from the north and therefore useless in these conditions. After a quick look at that, and any potential anchorage in the lee of the island, we elected to keep going towards the potentially more protected anchorage at Cabo San Quintin. We continued to make rapid progress in seas that became a bit friendlier and, in fact, it was a very exciting sail, although I'm not sure Karin enjoyed it so very much! We rounded Cabo San Quintin around 15:00 and motorsail beat our way up behind it in winds that were still blowing in excess of 30 knots. We dropped the navy anchor with a load of chain and then motored up and threw the Danforth out on chain and rode aswell. Holding was good, but the anchorage was still almost as rolly as the last two had been. One image that I'll never forget, however, was that, as we arrived at our anchoring place after a somewhat stressful and tiring day of sailing, with the wind still blowing quite strongly across the low-lying sand and scrub, the crew of a small white Catalina sailboat anchored up a bit ahead of us, were casually lighting a real-fire barbeque in a stainless BBQ afixed to their stern rail. There were enormous flames rising from the BBQ, but the crew of that boat looked entirely relaxed and happy as we struggled to beat up to our desired anchoring position. This was our first ever sighting of 'Somewhere', a boat that we would come to know quite well as time progressed! 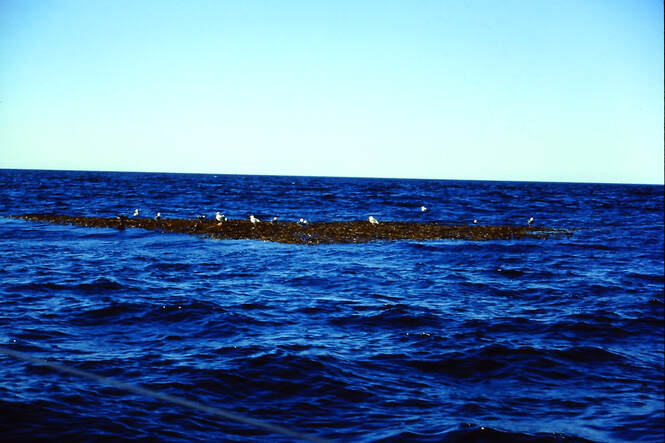 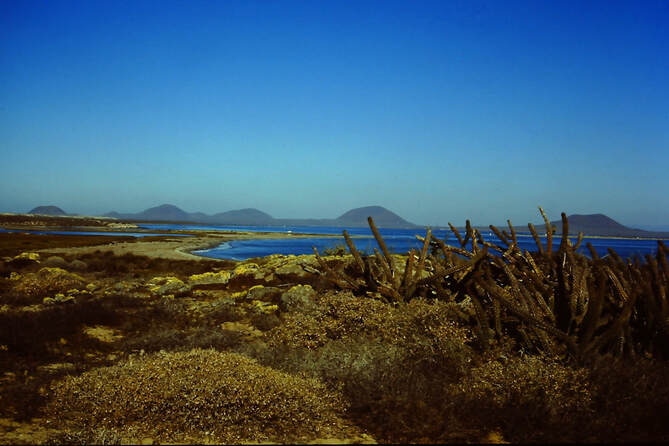 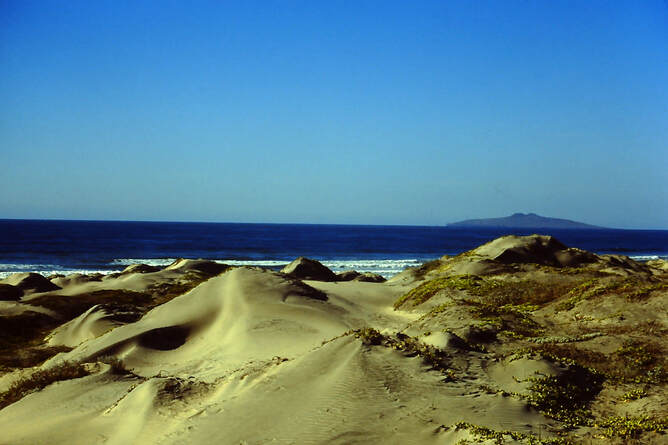 From Cabo San Quintin
We stayed in Bahia San Quintin the next day, taking the time to go ashore and have a walk and admire the views. Back at the boat, we made dinner and settled down for the evening when a curious occurence occurred. Night had fallen on a day that had been significantly calmer than the day we arrived. We were down below reading or relaxing, when I happened to glance out of the porthole and noticed a flashing light. It seemed to be flashing at us... I soon realized it was an attempt to communicate, so, not being au fait with Morse light signalling, I grabbed a sailing reference book and looked it up. The signal was a clear letter 'C', meaning, 'I wish to communicate with you'. I switched on the VHF radio and sent out a general message on channel 16. An answer came back quickly, that turned out to be from the captain of a large fishing vessel anchored in the bay. He explained that some of his crew had taken his dinghy and rowed ashore,  but had not returned. He and his remaining crew members were now stranded aboard their vessel with no dinghy and missing crew. He asked if we could come over to take one of his crew members ashore to look for the missing people. I pumped up our trusty Sevylor and rowed over there, picked up one of the crew and then rowed him, through the surf, ashore. The missing dinghy and oars were there on the beach, but there was absolutely no sign of the missing crew members. After a short look around, I left the fisherman to search further and rowed back out through the surf, arriving soaking wet from the waves and spray at Miss Molly I. Later we heard that they never did find the missing crew members who were presumed to have made off to the nearest village...

The next morning, we were underway again at 07:00, motorsailing in the calm morning airs in the direction of Punta Baja. the wind picked up from the northwest at about 11:00, building over the noon period and allowing us to sail down to our next anchorage behind Punta Baja. We anchored in about 17ft of water on about 135ft of chain - there was plenty of room and the wind was obviously still building. Come late afternoon, the wind had built to be the strongest we'd experienced, and we'd put out a second anchor! Holding was good though :-)
Powered by